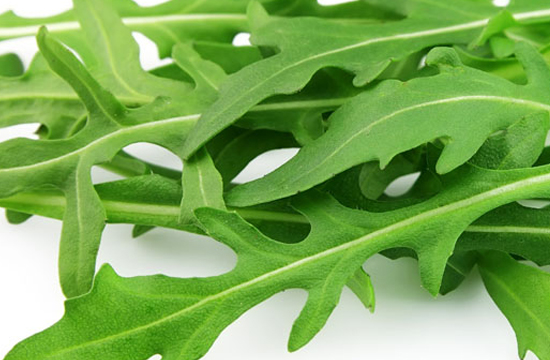 Rocket salad (arugula)
from November to May

Grown mainly in central west Asia and in the Mediterranean basin, with the Latin name of "eruca sativa", it was known and used by the Romans as an aphrodisiac food. It is said that in the Middle Ages to use rocket salad in the kitchen was even banned. During the Renaissance period was written on its aphrodisiac effects; the herbalist Matthias de Lobel (XVI sec. narrated that some monks, excited by a rocket-based drink, abandoned the vow of chastity. The leaves of arugula have a bright and lively green color, are firm and meaty, not too big, and the taste is slightly spicy and very aromatic. It Contains only 25 calories per 100 grams, Beta-Carotene, many vitamins and much folic acid. It can be eaten either cooked or raw, it is a detoxifier for the liver, digestive and stimulant for the appetite.